Home » Film and Television » Details for TV and Film 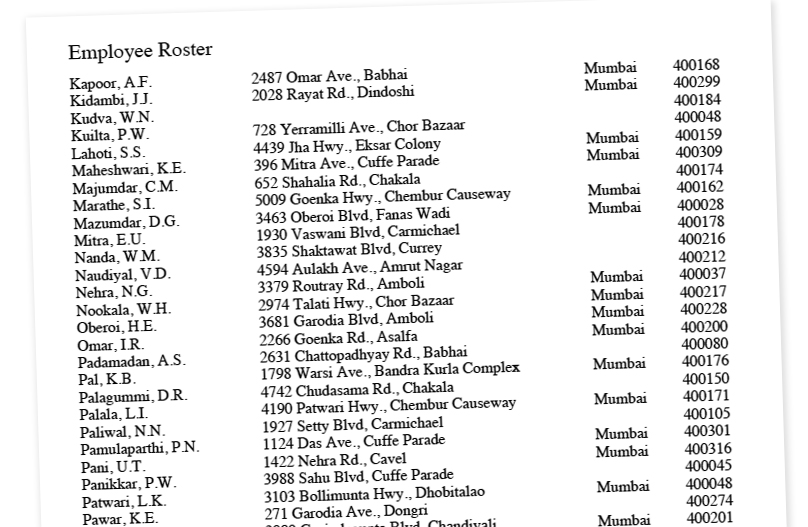 When a show needs a prop that’s a list of information, and it needs to be long, it also needs to look as real-world as possible. So where do we get the information? We can’t just copy, say, a phone book for a list of names and addresses or numbers, since that would present legal problems. So to fill up a form or computer screen with info… we have to make it up. But thinking up and typing in a ton of fake names and other info would take forever. So how do we do it? Enter the trusty spreadsheet!

The propmaster for Criminal Minds: Beyond Borders needed a list of employees for a company in Mumbai, including addresses and postal codes. The standard practice for names you can’t afford to run through clearance is initials, plus a last name. So here were the steps:

1) Went to Wikipedia and copied a list of common Indian surnames.
2) …then looked up names of neighborhoods in Mumbai, and grabbed that list (Wikipedia is very handy for lists like these.)
3) Created a spreadsheet with a column for surnames, and pasted that list in… then randomly deleted enough to knock it down to a list of 120.
4) Added a column to the right of that column with a formula that produced a comma and space, then added couple randomly selected letters of the alphabet, plus periods, to create first-and-middle initials.
5) Added an address column with a formula something like this: Create a random street number between 110 and 5498, then grab a random name from the surname column and use it as a road name, then randomly add on one of these: ,”Rd.”,”Ave.”,”Blvd”,”Hwy.”. Lastly, randomly select one of these neighborhood names and add it on: “Aarey Milk Colony”,”Agripada”… etc.
6) Added a column for the city, then a random postal code within a certain range.

After calculation, the info is copied from the spreadsheet in separate columns and pasted into an editable PDF form that gets concocted from scratch — so the propmaster can make last-minute changes to the text.

I once used a similar process to create a lengthy log of flights in and out of a small airport. Lots of detailed columns for that one.

I don’t know if anyone else does it this way, but I’m guessing there are still people out there who copy real phone books and such, and just hope the camera never gets close.