There’s a petition sponsored by the Sierra Club that encourages us to thank President Obama for building the agreement with China on carbon emissions. When I signed the petition, I submitted a somewhat edited version of the suggested text:
– – –
I’m writing to thank you and to show my — partial — support for the minimal carbon pollution reduction goals your administration just announced with China.

While this agreement is being called “historic” and is hailed as a giant, tremendously ambitious step toward mitigating the damage done by anthropomorphic climate change, a report by NPR says the Chinese would have to build one nuclear plant a week (that’s not what the world needs -more nuclear plants, hastily built) or the equivalent in solar or wind to make their goal by 2030.

And while the Chinese system of government makes it easier for them to make sweeping changes, I find it difficult to believe they will make their goal — or even intend to, considering that the goal is virtually impossible to achieve — both logistically, and in terms of economic support and political will.

I hope to be proven wrong.

Regardless, this agreement is too little, too slow, too late.

While, as the original petition text says, “the improved U.S. carbon reduction targets are an important step in the right direction toward reducing our impact on our climate”, we must remember that the Kyoto Protocol had virtually no net effect on emissions — even though there were penalties involved for noncompliance.

The United States also abdicated any moral standing by refusing to ratify Kyoto — meaning everything our country does now vis-a-vis emissions is suspect in other countries, and any new effort we make must not only meet but exceed the actions required to meet a goal like limiting temperature rise to 2ºC.

But when an agreement has no real teeth, it is more than useless — it provides an illusion of action, while no effect is being achieved.

As Canada demonstrated in 2011, all a country had to do to avoid those penalties was to withdraw from the Kyoto Protocol.

Withdrawal from a treaty like this should carry a penalty that is as least as great as those levied against countries that violate the agreement. It makes no sense for a country to have an option of withdrawal that results in a savings of more than $14Bn.

As for the scope and depth of this agreement with China — it is a start — albeit a fractional one.

There are still far too many nations — and private entities within nations — that continue to endanger the health of those of us in the present, in addition to the economies, well-being, and lives of future generations. How many government ministers look the other way as industries pollute with impunity, or even slash and burn countless hectares of forest that are not only no longer available to absorb carbon, but are actually creating — through burning — 10% or more of the world’s total carbon emissions?

We need to take direct and dramatic action to stop flagrant polluters like these. If the government of a country like Indonesia is not willing or able to stop illegal clearing operations, then we should offer them direct support. Very direct.

The world is at a point in this climate-decline timeline when anything short of “whatever it takes” is simply not enough.

As the original petition text says, “I encourage you to continue to use your executive authority to establish a legacy of strong climate action.”

I also encourage you to make very serious economic sanctions an integral part of any climate change agreement that is broken by its signatories.

And I encourage you to step up your efforts — dramatically. Climate change is no respecter of political boundaries or politics. It will not pause so we can catch up at a “comfortable” page.

Sacrifices must be made, not only by individuals who do their best to reduce their own personal carbon footprints, but also institutions of every kind, at every level of influence and wherewithal.

Every time  you “take on the fossil fuel special interests that are all too entrenched in Congress” I will support you. Loudly.

Every action you take from now until the end of your presidency in terms of action against climate change — or lack thereof — will determine not only your legacy, but the lives of millions.

The future is not some abstract concept. In fact, it arrives here in a constant stream, every moment of every day. Each of the present moments we live has a direct effect on that stream. Because of this, we have a constant flood of opportunity pouring down on us.

Countless generations will judge you — and our present-day society — by what you do.

The world is watching you. Now, and for untold centuries to come.

It shouldn’t take eleven Nobel Prize winners to wake up the world to the massive destruction that’s been done by — and the even greater destruction that will be done by — our unchecked consumption of our natural resources.

But it can’t hurt for them to wave a red flag. 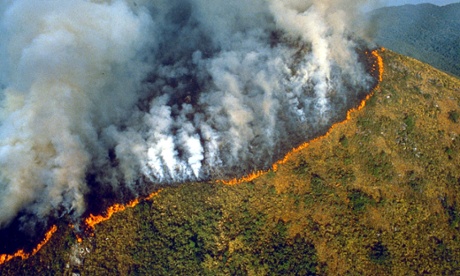 Nobel laureates call for a revolutionary shift in how humans use resources | Science | theguardian.com.

An article at Climate Central says a new study shows that “the upper 2,300 feet of the Southern Hemisphere’s oceans may have warmed twice as quickly after 1970 than had previously been thought.”

The facts we’re uncovering keep getting more and more grim. But our governments and corporations (sorry, yes, that’s redundant) continue to drag their feet on measures that would mitigate the damage we’re doing. Please… any time you see an opportunity to affect policies on climate change, take action. The mid-term elections are a great chance to make change.

After reading this article, check out the League of Conservation Voters’ list of endorsed candidates:  http://www.lcv.org/elections/endorsements/endorsements-13-14.html

It’s time to vote out climate deniers, and vote in climate hawks!

Oceans Getting Hotter Than Anybody Realized | Climate Central.

Big Oil has known for a very long time that their days are numbered. All of the millions they throw at elections and politicians are their desperate last straw-grasping. Big Oil needs to learn how to die with dignity. Just go, and let the next generation of power generation take over. And let me be the first to offer this article’s author a hearty “No duh?” to this paragraph:

There may be little point battling icebergs to drill in the Arctic, or in trying to extract oil from the ultra-deepwater fields in the mid-Atlantic, beneath layers of salt, three kilometres into the Earth.

In fact, there is a point to it — the point is for Big Oil to hoard as much cash as it can for itself and its heirs before its looming death — without regard to the additional damage to the climate and their fellow human beings they are causing.

They could have been visionaries. They could have, long ago, used a fraction of all those billions they make to research and develop incredible clean energy technologies that would have slowed or even stopped climate change, and would have create tons of jobs for Americans and those who live in the other Big Oil companies’ home countries.

But instead, they chose immediate profits over their own future, and ours.

So now you’re on your deathbed, Big Oil. But I don’t expect you to have any sort of ethical moment of clarity. You’re still drunk on all that cash.

Read the article at Telegraph.co.uk:

Oil industry on borrowed time as switch to gas and solar accelerates – Telegraph.

Why the Scientific Case Against Fracking Keeps Getting Stronger | Mother Jones.